The popularity of rowing clubs in the 18th-19th centuries 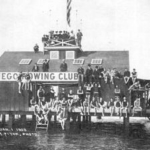 Rowing clubs, as we know them today, first appeared in London in the late 18th century. Two of these early clubs, the Star and the Arrow, merged after a few years into the Leander Boat Club. This club is still a prestigious and active rowing club whose boathouse is now located near the finish of the famous Henley-on-Thames race course. The popularity of recreational sports grew rapidly in the early 19th century and rowing was foremost among them.

By the 1820’s rowing clubs existed on the east coast of the U.S. and began to spread westward. The west coast’s first rowing club was founded in Vancouver, British Columbia in the 1860’s. Soon thereafter clubs were founded in San Francisco. South End (1873) and Dolphin (1877) are active to this day. It took only another decade for the sport to reach our Southern California community in San Diego.

In 1888 a group of San Diegans formed the Excelsior Rowing and Swim Club. At that time the town was in the midst of a population boom and the number of residents had reached about 14,000, up from only 2,600 people in 1880. Rowing was then one of the most popular sports Competitive rowing events, along with boxing and horse racing, drew very large crowds and fostered extensive wagering.

In 1891 the Club dropped the name Excelsior, and became the San Diego Rowing Club. In eight years the members had raised the $2,000 necessary to build their first boathouse. The boathouse built on pilings in San Diego Harbor would house the Club for seventy-nine years. To celebrate the new boathouse a group swim, called the New Year’s Day Plunge, was organized on January 1,1900. Today, this tradition continues at the old boathouse, now refurbished as a restaurant.

From the early 1900’s until World War II the Club flourished. Largely recreational and social in purpose, it soon became a significant place in the community. Within walking distance of Downtown San Diego, the Club attracted many influential men from the business, professional and government sectors. Drawn by the rowing, swimming, sunbathing, and the only handball court in town, these men soon found themselves discussing important public and business issues. The San Diego Rowing Club became a place for camaraderie, competition, leisure, and important networking.

Socially, the Rowing Club was a keystone in the community. The Club membership during those days was limited to men and an invitation to a social event at the San Diego Rowing Club was highly sought after. 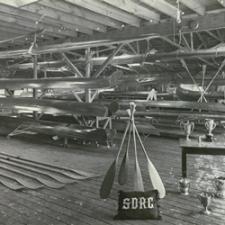 There was a Pacific Association of Amateur Oarsmen that held periodic championships, usually in San Francisco to which the San Diego group traveled by ship. San Diego Rowing Club won numerous championships during the1920’s and 1930’s.

Due to the distances between Clubs on the West Coast, and before air travel or good roads for driving were constructed, interclub competition was irregular. Competitions during these years were primarily limited to competition between Club members in such events as posting a good”skeeter” time in a skeeter time trial. You qualified as a “skeeter” if you could scull a wherry about a half-mile, turn a buoy and return in a specified time.

As Andy Borthwick noted, the Rowing Club was the place to be in these early years. “So everybody joined the Rowing Club. You go down that list and every mayor up to Johnny Butler came out of the Rowing Club; every one of them were members, and practically every councilman, and pretty nearly every supervisor — they all belonged to the Rowing Club.”

WWII and the second half of the 20th century

Club membership and San Diego’s population swelled during World War II, but the harbor became much busier with Navy vessel traffic, and the appeal of swimming and rowing in the harbor diminished. After the War, the Rowing Club began a long slow decline. The population growth was in the suburbs, the waterfront was less appealing and though rowing continued, soon constituency of the membership outnumbered the oarsmen. Outvoted, the rowers were not able to take advantage of a San Diego City offer of a boathouse site during the development of San Diego’s recreational water park, Mission Bay.

The end almost came in 1978 when the Port Authority in its plans for the Seaport Village redevelopment condemned the old boathouse. While the boathouse and facilities were still used, they were in very poor condition. In 1983 the Chart House Restaurant group acquired the property and invested $1.7m in renovation efforts and kept the spirit of the original boathouse alive.

The end of the San Diego Rowing Club did not come, however, due to the persistence and efforts of a group of twenty members. This small group located a new home for a “boathouse” in an elongated garage in the City’s Recreation Center on Santa Clara Point in Mission Bay.

A new home in Mission Bay and Membership grows

The resurrected Club and its small membership were intent on competing in a new and growing array of rowing events, which included the FISA Veteran’s Regatta. In the next 10 years the Club slowly grew to a little over 100 members, all rowers. As the popularity of rowing grew so too did San Diego’s three universities’ rowing programs were also growing, running out of space in the H. Del Beekley boathouse.

A.W. Coggeshall, a longtime SDRC member and competitive oarsman, died in 1987 and left the local rowing groups separate bequests to foster the sport that had meant so much to him. This resulted in the building of the Coggeshall Rowing Center. Today this center houses the San Diego Rowing Club in four boat bays plus the Garty Pavilion and the University of California, San Diego and University of San Diego collegiate crews, each in their own boat bay. The San Diego Reader interviewed, and wrote an extensive article about A.W. Coggeshall in 1983. The land on which the boathouse was constructed was leased from the City of San Diego for 25 years to the Intercollegiate Rowing Consortium and SDRC.

In 2007 row2k interviewed Randy Hanna and Mike Coors of SDRC in an article entitled Two coasts, two clubs, too bad for the rest of us in which Mike commented “The sunrise…the quality of light is spectacular…the way the sun hits the water is magnificent” and so it remains today for rowers young and old.

The first lease for the El Carmel Place property expired in 2012 and was negotiated and renewed in 2018 for another 25 years by and between the City of San Diego, SDRC, UCSD, and USD. This concept of the Intercollegiate Rowing Consortium (IRC) has been maintained and strengthened to provide great rowing experiences in Mission Bay.

SDRC today and in the future

The Club membership in this new facility has grown to nearly 500 men and women. The Club includes a large and successful junior program, a masters group, senior athletes, as well as recreational rowers. Rowing programs focus on bringing this great sport to the wider San Diego Community and take into consideration athletes with unique needs. State of the art workout equipment and over 120 shells are housed in our facility. Interested athletes can take instructional lessons while members have access to singles, doubles, quads, fours, eights, boat storage, and locker rooms.  The Club members represent many different communities within San Diego and comprise an intimate community of their own. We are not just rowers — we are the San Diego Rowing Club.

Today the red and white colors of the San Diego Rowing Club are seen frequently in California, across the country and often at championships throughout the world.